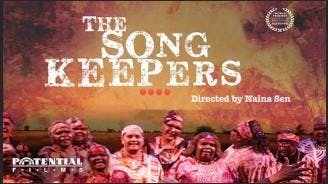 This documentary tells the inspiring story of the Central Australian Aboriginal Women’s Choir and their first tour of Germany. In the churches of remote Central Australia, a 140 year old musical legacy of ancient Aboriginal languages, German sacred hymns and baroque music is being preserves by 4 generations of women.

With their charismatic musical director, Morris Stuart, the choir embarks on an historical tour bring the historical music back to Germany, in their own languages.

“…a satisfying celebration of these women, their conductor, Morris Stuart, and their music.” – David Stratton, The Australian