The Wonderful World of Gems is one of our most popular school holiday activities. It is hosted by Myli Programs Officer Tim, so we thought we would ask Tim to tell us a bit about the program and what is so special about his gems!

‘The Wonderful World of Gems” is a program initiative that I first thought of in early 2020, when I was doing some cataloguing work on my Gem collection.

I’ve been collecting gems and minerals since I was a boy and my interest was first inspired by my Grandmother’s massive fold-out jewellery box, which I always used to play with when we would visit. Rather than steering me towards interests ‘more suitable for boys’, my Grandmother, I think, was quite chuffed that I admired her jewellery collection so much (although I’m sure she hid the good stuff when she knew I was coming over). She encouraged me to get interested in gems and minerals, and whilst I never had enough money to pursue a collection worthy of a whole room with wall to wall glass display cabinets, I have managed to pick up some wonderful specimens at markets and shows over the years.

I was wondering how I could work my hobby and collection into a school holiday program for the library that would appeal to both children and adults. I initially thought of making pet rocks from gem stones or crystal healing wands, but I found out that this would be pretty expensive because I would need rather large stones. I also considered it might be a bit too crafty for what was to be essentially a science-based program. I then saw some Gem chips for sale and hit on the idea of having a fossicking activity. As the centrepiece of the program, children could fossick around for semi-precious stones hidden amongst sand, dirt and shell with tweezers and a magnifying glass and then put their finds in a little bottle to take home with them as a souvenir of the event. This turned out to be the light bulb idea as the kids absolutely love getting in there and searching for buried treasure – albeit on a micro scale.

I begin the event with a brief talk about gems and minerals – what varieties there are and where they come from. Children then have the choice of three activities that they can participate in during the event.

I have been absolutely thrilled with the response and attention the program has received within our organisation. It has even attracted some international attention from a student Gemologist in Canada wanting to know how the program is delivered! 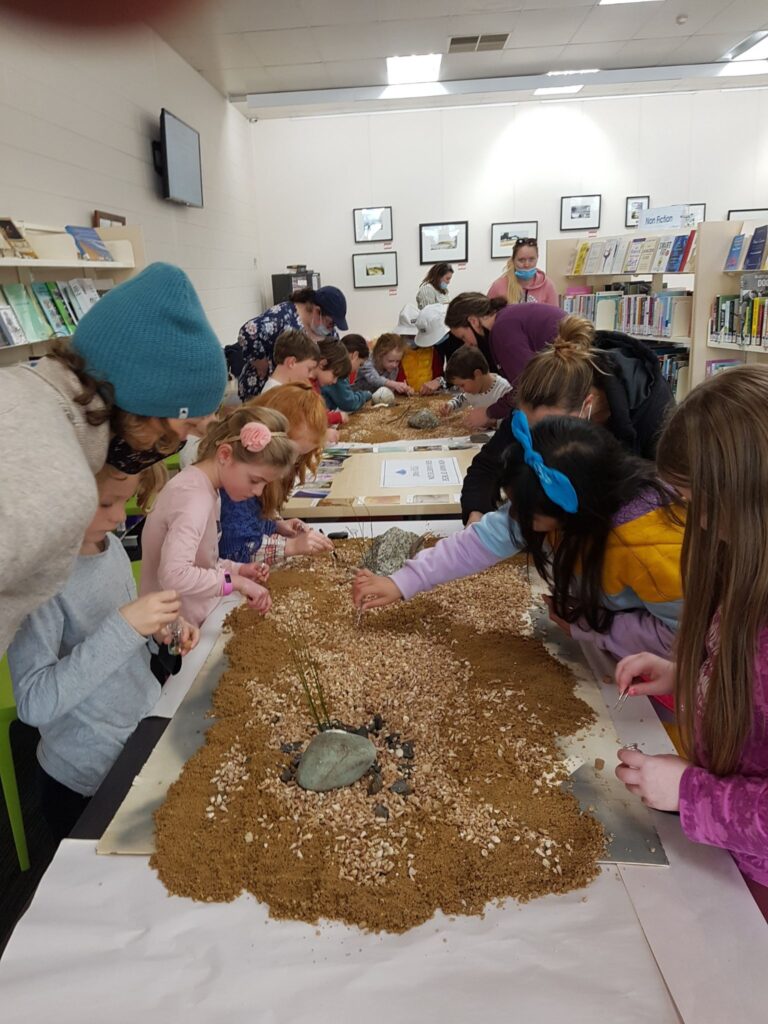 I’ve been delighted that every Myli branch has been so keen to host “The magical World of Gems” event during their holiday programs. By far the most positive feedback comes from parents: some have told me the fossicking activity is the longest they have seen their child focused on one activity without getting distracted. Quite an achievement today when concentration spans with youngsters seem to be shrinking! I have heard reports from colleagues that children who have attended the events come back into the library to borrow and order books on Gems and minerals – it is particularly gratifying that the program is stimulating interest in perhaps the next generation of geologists, gemologists and jewellers and enthusiasts like me.

Favourite Patron quote: “I absolutely loved your Gem show, Tim. You are a Rock Star.’

The next session of  Wonderful World of Gems will be held at Mirboo North Library on Thursday 22nd September 2.30pm.