Together We Read 2021 – Scrublands

West Gippsland Libraries joins hundreds of public libraries and thousands of readers across Australia in offering the latest Together We Read: AU/NZ digital book club selection. From 1-15 September, you can enjoy Australian author Chris Hammer’s award-winning crime novel, Scrublands, as an ebook or audiobook for free. Readers can access the digital book with no waitlists or holds by downloading the Libby app or by visiting wgrlcvic.overdrive.com. You can also participate in an online discussion with other readers around Australia and New Zealand.

The Together We Read: AU/NZ digital book club connects readers through participating Australian libraries with the same ebook for two weeks and only requires a valid library card to get started. This free program is facilitated by OverDrive, the leading digital reading platform for ebooks, audiobooks and magazines and creator of the award-winning Libby app. If you’re not a WGL member, join online. 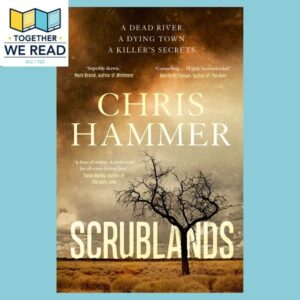 In Scrublands, a charismatic and dedicated young priest calmly opens fire on his congregation, killing five parishioners before being shot dead himself in an isolated country town. A year later, troubled journalist Martin Scarsden arrives in Riversend to write a feature on the anniversary of the tragedy. But the stories he hears from the locals about the priest and incidents leading up to the shooting don’t fit with the accepted version of events his own newspaper reported in an award-winning investigation. Martin can’t ignore his doubts, nor the urgings of some locals to unearth the real reason behind the priest’s deadly rampage.

Scrublands is published by Allen & Unwin and can be borrowed from West Gippsland Libraries and hundreds of participating libraries in Australia during Together We Read between 1-15 September. The digital book can be read on most computers and devices, including Kobo® tablets and eReaders, iPhone®, iPad®, Android™ phones and tablets and Chromebook™ without waitlists or holds. The title will automatically expire at the end of the lending period, and there are no late fees. Download Libby or visit wgrlcvic.overdrive.com to get started.

More information about Together We Read: AU/NZ can be found here.